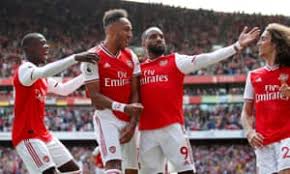 Pierre-Emerick Aubameyang scored the winner as Arsenal defeated Burnley to record successive victories at the start of a Premier League campaign for the first time since 2009.

French striker Alexandre Lacazette marked his return from injury as he impressively held off Erik Pieters and shot between the legs of goalkeeper Nick Pope to put the Gunners ahead after 13 minutes.

The hosts, who handed full debuts to £8m defender David Luiz and Real Madrid loanee Dani Ceballos, saw an immediate response ruled out for offside after Reiss Nelson appeared to have completed a slick passing move with a confident finish into the roof of the net.

But the impressive 23-year-old Ceballos recovered possession to set up Aubameyang for a powerful, low finish with 64 minutes played.

Burnley goalkeeper Pope made a series of fine saves to keep the Clarets alive, but he was unable to prevent his side losing a 10th straight league meeting with the Gunners.