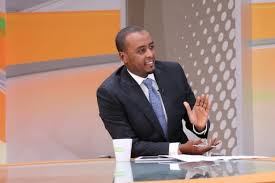 He announced his exit via a twitter message below:

It has been a wonderful 10 years at Citizen TV. I have enjoyed & relished every moment I shared with my colleagues at RMS. I have decided to take a break after October In Sha Allah to concentrate on other matters. Loved the fans, the critics & everything in between. See you soon.

He however did not give reason as to why he quit and instead stated he is taking a break in october.

Owing to his conduct and respect, many media personalities  have come out to wish him nothing but the best. They were led by KTN’s Lindah Ogutu.

Below are their messages.

Collins Ogutu All the best for the future Hussein. A great journalist who is more truthful than neutral!

Bernard Chitunga What a talent.. You will be missed Hussein. Keep exploring

Lindah Ogutu All the best my friend

Mundir Abdirahman Hussein Mohamed, see you in a better place. Sincerely speaking, you revolutionized Mainstream media In Kenya. We will for sure miss you. Wish you success in your endeavours. God bless.

Brayo Omosayansi You’ve ever been my best broadcaster, will miss you. Every Tuesday Night I usually waited to see you there with such a welcoming advert………….. “Live from Citizen TV this is Tuesday Night By Hussein Mohamed”… All the best in your next move.

Jacques Masea You taught me a lot when I joined RMS, we made fun, we researched and prepared the Big Question show. I wish you well my brother.

Alfred Mwanzu All the best Hussein. You’ve always been my favourite anchor on prime time news with your in-depth interviews. Good luck.

Paula Mwalo Boss I sure wish you well, and I hope you are making a money moves. BBC, CNN maybe? All the best.

Adawa Junior Great journalist, we gonna miss you our screen Hussein all the best in your future.