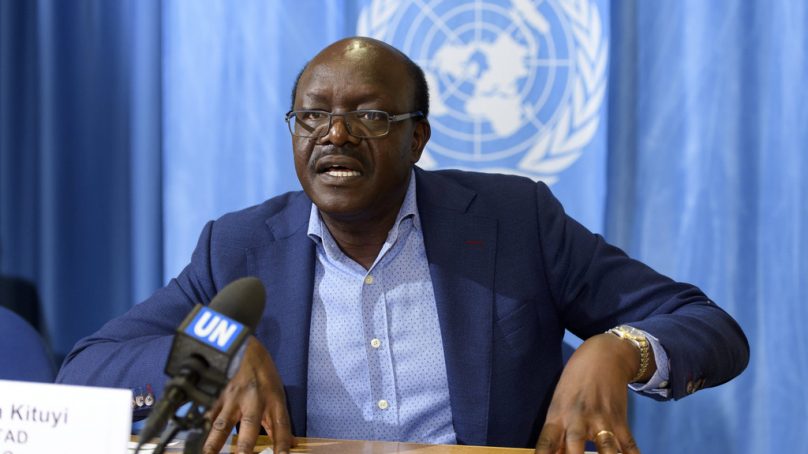 Drama as broke Mukhisa Kituyi is stranded in Nairobi

United Nations Conference on Trade and Development (UNCTAD) Secretary General Mukhisa Kituyi, who has announced his plans to vie for presidency, was stranded in Nairobi after failing to hike a lift in a chopper to attend the funeral of the Hannah Mudavadi, mother of ANC leader Musalia Mudavadi.
The funeral was attended by who is who in Kenya’s political terrain. Among the mourners in chief were Uhuru Kenyatta, ODM leader Raila Odinga, Moses Wetangula (Ford Kenya), Kalonzo Musyoka (Wiper) Peter Kenneth, governors and senators.
According to a Luhya MP, before the burial, Mukhisa tried to call various dignitaries who own choppers requesting to be given a seat but was not successful. Many were left wondering how the presidential aspirant will manage his campaigns if he cannot hire a chopper.
After failing, Mukhisa was holed up in Nairobi and followed the funeral proceedings like any other ordinary Kenyan on local television channels that were airing. It is said Mukhisa is depending on Chinese tycoon Jack Ma to fund his presidential bid.
Ma’s current tribulations in China where he has gone missing is greatly affecting Mukhisa. In fact, his campaign team is now lamenting of not getting paid and just offering charity services. Mukhisa has been touted as a compromise candidate in 2022 Uhuru succession race.
Mukhisa’s announcement to vie for presidency in 2022 is a litmus test for both ANC party leader Mudavadi and Wetang’ula. Kituyi, who was a minister in Mwai Kibaki’s regime, is a shrewd politician who can not be wished away.
Mudavadi and Wetang’ula will now have to change their campaign tactics in a bid to woo the Luhya community after Kituyi made it public to compete them. Kituyi is already shopping for a new party he would use to run for presidency.
Reports earlier indicated that Kituyi was likely to vie for presidency on Ford Kenya if a coup instigated by powerful forces had succeeded and the Kanduyi MP Wafula Wamunyinyi-led faction snatched it from Wetang’ula.
Mukhisa, whose term at the Geneva based organisation ends in August 2021, is likely to call it quits probably early enough to concentrate on his presidential campaigns.
Mukhisa who made the announcement to go for the country’s top seat in Bungoma has so far crisscrossed Bungoma, Trans Nzoia and Kakamega counties to cement his presidential bid.
He has met key opinion leaders including youth, women leaders, elders and political opinion shapers.
During the burial, Uhuru said he will might decide to support a person out of the two tribes who have ruled this country, sthe Kalenjin and Kikuyu.