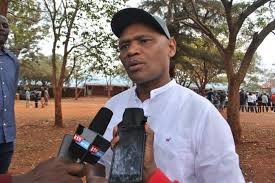 Thika Town MP Patrick Wainaina on Thursday stormed the Thika lands registry following numerous complaints by residents over poor service delivery.
Accompanied by the Thika West DCC Douglas Mutai, Wainaina sought answers to various complaints lodged by people among them delayed land search results and double allocation of land documents as experienced in some areas.
Despite acknowledging the fact that there might have been an issue of understaffing in the registry, the MP said that the issue of service delivery boiled down with proper time management and use of the available resources which included human resource.

In this regard, Wainaina asked the Thika Lands Registrar Bernard Leitich to sit down with his staff and list down all the challenges they faced as a registry so that he could address them with the relevant ministries.
The MP warned land-buying companies that were yet to issue their clients with title deeds that their days were numbered. He noted that such practice was among the factors that had led to land frauds and contributed to land grabbing which was rampant in the area.
Responding to these allegations, Leitich admitted that the registry has had its own challenges, which he promised to look into.
Leitich also warned brokers against hanging around the registry’s entrance and offices as they were a hindrance to service delivery.
Thika lands office has been notorious in land fraud with many unsuspecting land buyers losing millions of their hardearned cash to conmen who take advantage of the confusion at the lands office to make a kill.
People have lost money to brokers who camp at the offices and liaise with corrupt officials in the registry to defraud unsuspecting Kenyans.
Brokers camp around the registry to take advantage of the confusion and frustrations to overcharge people coming to conduct searches or ascertain other land related issues with some crooks using the opportunity to con unsuspecting clients or swindle people of their land.
Previous
County
Read more