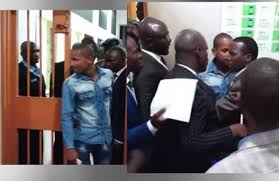 Dramatic rearrest of a journalist as Babu Owino’s(VIDEO)

In a similar fashion when MP Babu Owino was released by Milimani law courts after making derogatory remarks against President Uhuru during the 2017 run up to elections,Nigerian Journalist Sokore and Owale had tough times with DSS

In a viral video on social media the two are seen trying to escape arrest by about 15 operatives of the Department of State Service move to rearrest Sahara Reporters publisher, Omoyele Sowore, and his co-defendant, Olawale Bakare, after the Friday’s proceedings at the Federal High Court in Abuja.

The DSS had released the two men hours after the judge, Justice Ijeoma Ojukwu, ordered the the agency to release them within 24 hours in line with the bail granted them by the court.

Earlier at the Friday’s proceedings, the judge and the defence counsel had commended the DSS for complying with the court’s order.

By an agreement between the Mr. Femi Falana-led defence team and the Liman Hassan-led prosecution team, the matter was adjourned till February 11 for the commencement of trial.

But shortly after the court clerk called the next case and people started leaving the courtrooms, DSS operatives numbering about 15 started making some moves towards Sowore and Bakare.

Sowore and Bakare turned back and made a fast pace back to the courtroom.

The development led to a commotion which forced the judge who was handling the next case to immediately suspend sitting and receded to her chambers.

This is the same drama with Babu’s rearrest.

Turns and Twists as Jowie sues the government