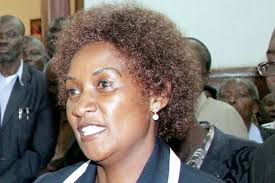 Principals in Trans Nzoia have raised concern over the operations of Teachers Service Commission regional boss Boniface Okumu. He is said to have been promoted a few years ago after working as a quality assurance officer and taken to Mombasa as his first posting before he was moved to Trans Nzoia county.
This is after teachers in his former stations complained about his modus operandi. It is suspected that Okumu has been bribing his way to get promoted and does not depend on performance hence his love for kickbacks to help him achieve his goals. Now eyes are set on TSC chief executive officer Nancy Macharia.
Teachers lament that Okumu has a habit of going to schools on Mondays and Fridays as early as 7 am to engage them.
Okumu assembles students and instructs them to write on small papers at what time the principal arrives at the school. Okumu is accused of receiving brown envelopes from teachers implicated in indiscipline and in return, the victims, a majority of them from girls schools in the county end up being transferred without any action.
They have expressed their concern that there is no transparency in Okumu’s leadership. They said Okumu whose lust for money is like that of Bibilical Judas calls for meetings frequently and each school pays Sh1,500 which ends up in his pockets and nyama choma joints.
Recently, bitter principals boycotted a meeting Okumu called at St Monica Girls School.
The principals have urged area MPs Chris Wamalwa (Kiminini), Robert Pukose Satia (Endebess) and Caleb Amisi (Saboti) to petition TSC to transfer Okumu.