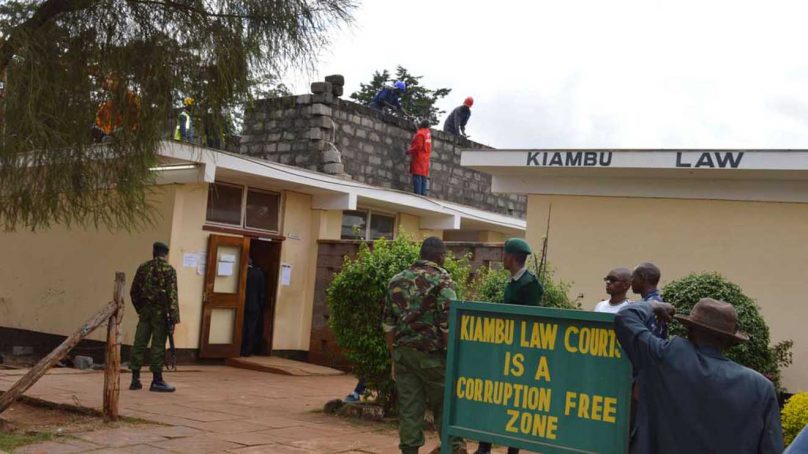 Kiambu Law courts has only one toilet which is shared among six male and female Magistrates and the Director of human resource management.

The Judicial staff members are therefore forced to queue to use the toilet and it is embarrassing, for other staff or members of the public to spot the officers pacing around when the facility is engaged.

Further, the sewage system of the staff toilet is faulty and keeps blocking, thus sending foul smell into the premises and the situation does not improve even after unblocking it, which calls for urgent rehabilitation.

Members of  the public who troop to the courts in droves have also not been spared the agony as there is only a single pit latrine, which comprises of one male toilet and a urinal and another for female clients. There is no provision for sanitary facility for people living with disabilities.

Worse still, the toilets are not connected to the sewer line and have no curtain making it embarrassing for use and are unhygienic.

A letter written by the station head, Ms. Patriciah Gichohi and dated February 5, 2018 requested for funds to carry out the construction of ablution blocks and a canopy to cover the ramp and stairs to the new twin courts, registry and waiting bay and benches outside each of the twin courts.

According to a report, Kiambu law courts received a report from NEMA dated May 26, 2017 concerning the state of affairs at the institution, where the director made a raft of recommendations that are yet to be implemented.

NEMA recommended that the pit latrines for the public use be converted into water closets, which should be provided with two water closets for ladies and one for gents plus the urinal.

The report further recommended that the eight water closets used by the suspects, prisoners and prison warders in the cells should be provided with cast iron flushing cisterns or any other quality hardy enough to withstand mishandling.

Owing to the faulty condition on the closet used by this category of people, foul smell has continued to fill court one and two which have direct access to people from the cells thus causing discomfort for those attending proceedings.

The Staff and the public accessing the Kiambu law courts are still not at ease due to challenges faced when accessing the ramp, waiting bay and staircase in the area which were constructed without a canopy.

The concerns have not been attended to and court goers have continued to suffer especially during the rainy season, when the ramp becomes slippery and anyone accessing the twin courts and High Court registry can easily slip and fall down, thus making it dangerous to use.

The court leadership has appealed to Judiciary to look into the issues so that sanitation conditions and their safety, while traversing the various structures in the law courts are made friendly and easy to use.

Puzzle over Vihiga teacher burnt to death in his house