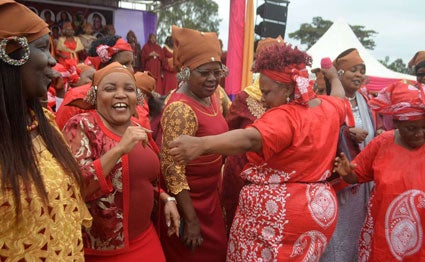 Controversy has rocked officials of Inua Mama outfit in Mombasa with claims of embezzlement of funds meant for table banking and other women projects.

The interim officials were supposed to formulate programmes on how Mombasa women allied to Inua Mama grouping of MPs supportive of William Ruto’s 2022 presidential bid are supposed to be uplifted economically but it is claimed they are pursuing personal interests and conning gullible women.

Accusations and counter-accusations have flooded Mombasa Whatsapp forums with claims of sexual affairs within the group also surfacing. The allegations of mismanagement and the ongoing controversy surrounding Inua Mama activities in Mombasa have reportedly reached DP’s office and a crackdown is underway.

“The intrusion of the Inua Mama noble idea by cartels purporting to have the ear of the deputy president and conning poor women of hard earned money has tainted the vision of what the initiative was supposed to achieve. This is very unfortunate,” said a woman.

The angry women are also unhappy that the cartels are spoiling for the DP by promoting tribalism within the local outfit by making it look like the Inua mama Mombasa chapter is a Rift Valley affair.