A fresh row has erupted among various Kanu factions in Kisumu county ahead of an anticipated visit of the party chairman and Baringo senator Gideon Moi. Talk among party members is that some of those claiming to be officials, simply want to fleece Senator Moi his millions of shillings.

Unlike before, the Kanu chairman of late has been dishing out millions of shillings to Kanu delegates whenever he meets them on what the party leader terms as “pika pasi mfuko” or oil delegates pockets. Two factions claim to be the regional party coordinators as Gideon and William Ruto start warming up to Nyanza. Moi was scheduled to tour Kisumu county on January 9 but the visit never materialised. Ruto was similarly expected to tour Kisumu last year but the plan never materialised. The simmering row has all along been over who are the genuine bona fide office holders.

One faction is led by a former aide to one time cabinet minister Dalmas Otieno, Milton Obote Kwach and Jack Nyambega while another is led by city businessman Fred Kowido. Otieno, Kwach camp is being viewed suspiciously. Kowido last year laid claim to the county leadership and immediately announced that he will soon receive Moi after a massive membership recruitment drive. Kwach later hosted officials from his camp and ‘clarified’ that they were the bona fide officials. In Kwach’s lineup, he is the secretary while Jack Nyambega is the chairman-cum-Nyanza regional coordinator. Another faction led by Kisumu Kanu chairman Dan Machar has also opened a new office in the county.

The faction led by Nyambega said the Kisumu branch office has legitimate and bona fide officials recognised by the Kanu headquarters. He named them as Milton Obote (secretary) and Peter Omulo (treasurer). Carlos Ouma, who reportedly acts for the party, said Nyambega, Obote and Omulo are the bona fide party officials. Party faction operatives led by Kowido recently met Kanu secretary general Nick Salat where they discussed a range of issues which included revamping the outfit in the region. Salat is also the chairperson of the board of the Agricultural Development Corporation. 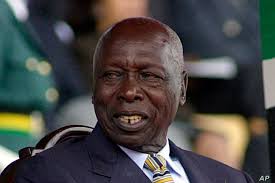 Kowido claims he has been given the mantle to reorganise the party in order to revitalise it. He said that indeed the party has accorded him the mantle to reorganise it in Kisumu county. Kanu at the moment has no positions of sub branch and branch chairmen as it used to be the case. Instead the party reorganised its structure and created the position of regional coordinators. Kowido said he will now embark on a massive membership recruitment drive ahead of the 2022 general elections. The businessman has already donated office space at his business mall complex near the Kisumu International Airport. Sources within the party headquarters have divulged that some of the targeted areas include Nyanza and Western regions where the late president Daniel Arap Moi used to have cell systems in the name of Kanu branch and subbranch chairmen. A former Kisumu Kanu sub-branch chairman Eliud Aum Ndalo welcomed t