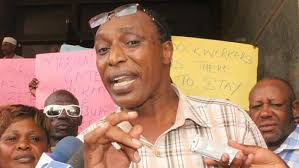 Two distinctive camps at the Dock Workers Union are bitterly opposed to each other in regard to the impending privatisation of the second container terminal at the port of Mombasa.
Union chairman Mohamed Sheria has accused secretary general Simon Sang of pursuing a personal agenda while pretending to be fighting for workers’ interests.
In a letter dated February 25 2019, the secretary general is appears to be secretly pushing KPA to license his entity known as Dock Labour Board to provide port services at the second container terminal including lashing and unlashing, security on board vessels, watch keeping, sign on, chipping and painting among other service relating to ship operations.
Sang is accused of using the privatisation issue to create fear among port workers and incite them against union officials opposed to his style of leadership. 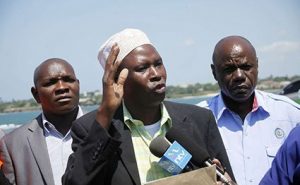 Sheria has on numerous occasions distanced himself from the claims that he supports privatisation. He says Sang’ runs the union without the members’ input.
Now, some officials want fresh elections in six months to remove the general secretary from office.
The anti-Sang camp which Sheria leads and includes vice chairman Gunda Kaneno, treasurer Anthony Olonde, Joseph Makero, Zuhura Iddi, and Salim Bambaulo accuses Sang of wrecking the union for selfish gains.
The camp has also blamed Sang for playing games with the lives of 28 union officials who were sacked in 2015 for participating in a one-day strike over NHIF deductions that had been sanctioned by Sang.
“We are aware Sang was behind the sacking of the 28 union officials and has been a hindrance for their return because he wants to use them to play union politics. When William Ruto directed that they be reinstated in 2017, it is Sang who ran to the then KPA chairman Marsden Madoka to block the move. Shame on him,” thundered Sheria.
“He has also been lying to the former union officials for the last four years that he is pursuing their interests yet there is no evidence that he is doing anything to have them reinstated. What kind of a heartless leader is this?” he asked.
It has emerged Sheria is now being listened to more by workers at the port than Sang whom they accuse of thriving on propaganda for cheap publicity.