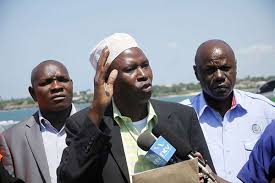 Fierce fights have engulfed dock workers union resulting into the removal of some officials on accusations of being traitors in the ongoing battle against privatization of the second container terminal.
General secretary Simon Sang says the government’s intention may be good but the process is suspect because it is shrouded in secrecy.
He has subsequently kicked out the union’s chairman Mohammed Sheria accusing him of being a puppet of cartels cleverly trying to take over Mombasa port’s second container terminal, a move he says would result into massive job losses at the port.
Sang said Sheria ceased to be union chairman after he failed to attend union meetings for three consecutive times.
He said as per the union constitution, Sheria is no longer DWU chairperson according the union records.
He said the remarks Sheria made during the commissioning of Bandari Maritime Academy, formerly Bandari College, which President Uhuru Kenyatta presided over were his personal views.
Sheria was accorded an opportunity to speak by transport cabinet secretary James Macharia during the ceremony that has further split the union.
The DWU boss lashed out at Sheria for using the platform to make inciting statements regarding the government move to privatize the second new container terminal popularly known as CT2 at the port of Mombasa.
Sang has distanced himself from the statement that Uhuru was purported to be behind the privatization of the controversial facility which he said is misleading. 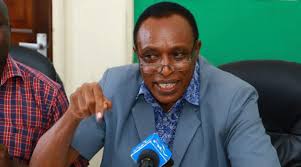 The DWU boss urged the head of state to give the controversial facility a second chance to allow a public participation exercise.
Sang says Sheria ceased being chairman on 29th June, 2019 after failing to attend three consecutive union meetings without apology. He said an annual general meeting {AGM} would be held in September to ratify Sheria’s removal.
He pointed out that the union’s constitution expressly stipulates that a member of the union’s board ceases to be one if he/she fails to attend three consecutive meetings.
However, during the commissioning of the Bandari Maritime Academy by Uhuru, Sheria who insists he is still the union’s chairman claimed Sang had poisoned workers’ minds that the President was behind a plot to buy the CT2.
But Sang has since disassociated himself from the allegations and dismissed Sheria as a fraud and a traitor trying to endear himself to Uhuru.
“He spoke on his own behalf. His inciting statement is a pure lie. When the head of state came to power, he was already well-off and does not need to do anything underhand,” Sang said. He added that he has never mentioned the head of state in the CT2 issue.
DWU, Coast MPs and human rights organizations are opposed to the process used to hand over the CT2 to the Kenya National Shipping Line. The deal was sealed last week during the signing of the shareholding agreement between the Mediterranean Shipping Company, the KNSL and the Kenya Ports Authority.
The opponents of the deal now intend to seek court’s intervention through Nyandieka Associates and Advocates to stop KNSL from running the CT2. “We have engaged top economists, financial analysts and top lawyers to stop this flawed process,” An MP from Coast pointed out.
Earlier before the signing of the deal, Coast MPs had asked Uhuru to reject changes made to the law barring a shipping line to operate a port.
The leaders said the Merchant Shipping Act, as was amended by parliament following a memorandum by the President, would impact negatively not only on the Coast residents but to the country at large.
The president resent the bill to parliament after the house passed it with the provision that only 100 per cent state-owned shipping lines be exempt from the law.
MPs from the Coast led by Mvita’s Abdulswamad Nassir had asked the president to consider engaging them on the matter to reach a logical conclusion when they spoke at parliament buildings.
The lawmakers’ fear is that 47 per cent of earnings from the second container terminal would go to a private entity–Mediterranean Shipping Company.
They say that the interests in the proposal to revive the Kenya National Shipping Line– in which the government has 53 per cent shares -was not for the benefit of Kenyans but for personal business interests.
It is claimed individuals in government have strategically acquired shares in MSC to enable them to earn in profits generated in the business arrangement.
Auditor General Edward Ouko in his report on KNSL’s accounts for the 2017-18 raised queries on the entity’s shareholding.
He said financial statements for the previous year reported an uncertainty surrounding the company’s ownership and an ongoing reorganization.
The reorganization was to reduce the par value share from Sh1,000 to Sh500 and increase the authorized share capital from Sh100 million to Sh300 million.
An additional 147,363 shares were to be issued of which Kenya Ports Authority was to get 38,670 and a new shareholder – Heywood Shipping Company– was to get 108,693.
The share structure is part of the bone of contention between the MPs and the President with the Coast lawmakers seeking a situation where KNSL is wholly owned by the government.
The amendment to the Act would now give a cabinet secretary sweeping powers to decide which shipping line should be exempted.
According to Coast MPs, even the report by the transport committee on KNSL reorganisation was illegal as it was signed by only nine members instead of the required 11.
“The danger of this arrangement is multi-faceted. Much as we respect the constitution, we are not in agreement with what transpired,” Nassir, also PIC chair, was quoted saying.
The lawmakers said in as much as they respect the President they are opposed to the manner in which the government had dealt with the revival of the moribund shipping line.
They said the happenings point to the direction that there are ill-founded schemes behind the whole privatisation of KNSL”.
Currently, Maersk Shipping Line conducts 40 per cent of the business at the port of Mombasa followed by MSC with 18 per cent, Evergreen (11 per cent), Pacific (10 per cent), and Ryce (7 per cent).
“What we have been asking ourselves is that once MSC is given the second container terminal to run, where will they get the business to create the 2,000 jobs they claim it will create?” Kisauni MP Ali Mbogo had asked.
At the same time, the MPs said there was no certainty that KPA employees would retain their jobs after the privatization.
But speaking in Mombasa last week, Uhuru said he would not entertain criticism aimed at curtailing his plan to revamp the KNSL and development of the blue economy.
“I have heard a lot of propaganda about the revival of the KNSL and the maritime reforms, but I have no time for it,” he said.