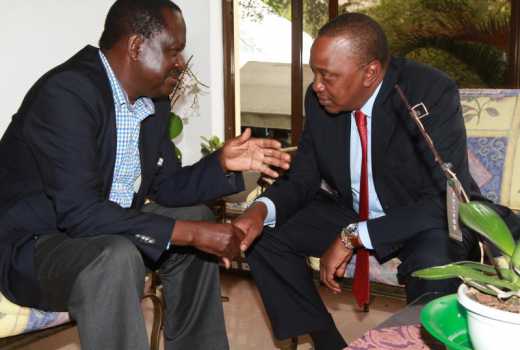 With about two years to the end of his term, President Uhuru Kenyatta is planning to reorganize his Cabinet to align it to his Big Four Agenda and succession matrix but intense lobbying for plum positions is delaying the announcement.

Insiders revealed to us that the President is under pressure from ODM leader Raila Odinga, Baringo Senator Gideon Moi and Wiper Leader Kalonzo Musyoka to appoint their cronies to strategic positions to give them a head-start in the succession race.

According to sources, at the heart of the lobbying is the new position created in the Executive Order No. 1 of 2020 of the Oversight and Co-ordination in delivery of National Priorities and Flagship Programmes. 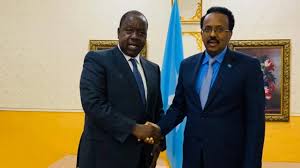 ÇS Matiang’i and President of Somalia

The position elevated Matiang’i to a Super CS in the arrangement that was dubbed ‘One-Government Approach’.

Other members of the committee were all Cabinet Secretaries, Attorney General Kihara Kariuki and Head of Public Service Joseph Kinyua.

But of late Matiang’i appears to have lost his place as the President’s most trusted Cabinet Secretary, with claims that his Principal Secretary Karanja Kibicho is undercutting him. 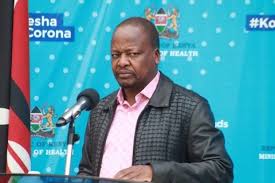 The appointment of former Nyeri Senator Mutahi Kagwe as Health Cabinet Secretary also appears to have worked to the disadvantage of the combative Matiang’i, who is now playing second fiddle.

The Executive Order No. 1 of 2020 elevates the holder to the equivalent of Prime Minister, with him or her reporting directly to the Head of State.

It is an improved version of the Secretary to the Cabinet position Uhuru had created in 2015 and appointed Monicah Juma, then the Principal Secretary, Ministry of the Interior and Coordination of National Government, to head but the appointment was shot down by the National Assembly.

With Kinyua set to retire any time from now, insiders say Uhuru had wanted Raila to occupy the new position of the Oversight and Co-ordination in delivery of National Priorities and Flagship Programmes as one way of cementing the March 9, 2018 handshake and further whittling down Deputy President William Ruto’s influence in government.

But Raila, according to sources, was advised by his close allies to front another candidate for the position instead of him taking it.

Also pushing to have his allies placed in the strategic positions is Gideon, who is also eyeing the presidency in 2022. 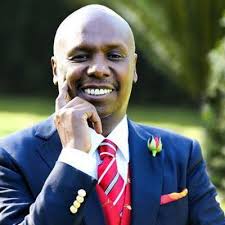 Insiders revealed that Gideon, who doubles up as the Kanu National Chairman and recently entered into a post-election coalition with the ruling party, is lobbying to be allocated three lucrative dockets.

Besides the National Coordination’s slot, the scion of Kenya’s second president wants Kanu given the Agriculture docket currently held by Peter Munya and Water and Irrigation held by Sicily Kariuki.

The thinking in Gideon’s camp is that the two dockets will improve Kanu’s visibility nationally as the holder will embark in sorting out issues affecting farmers and pastoral communities in Rift Valley, Central, Western and North Eastern regions.

Gideon, who is fighting to dethrone Ruto in Kalenjinland, believes the two dockets that are key to farming and pastoral communities will see the former ruling party regains its foothold in the regions it once dominated.

Indeed, even with Jubilee wave, the elected leaders have a soft spot for KANU especially in Samburu, Marsabit, Mandera, Wajir, Turkana and West Pokot.

According to sources, the President has reportedly settled on Isaac Rutto as the most ideal candidate to occupy the National Priorities and Flagship Programmes slot.

Both Gideon and Raila are comfortable with Isaac taking the position.

Besides chairing the team, Rutto will also supervise Regional and County Commissioners who will chair the committees in their respective jurisdictions and hence will have influence at the grassroots.

The new powers will accord him a chance to clip the wings of his perennial foe, the Deputy President.

The sources added that Raila is also lobbying for at least five cabinet slots, top being the Transport, Infrastructure, Housing, Urban Development and Public Works headed by James Macharia.

There are reports Macharia, who hails from Murang’a County, might be axed from the Cabinet over claims of corruption.

The President plans to re-organise government to bolster delivery of his Big Four Agenda, legacy ambition and national unity through Building Bridges Initiative.

The impending re-organisation will see at least five cabinet secretaries demoted and others reshuffled.

Those to be demoted include Matiang’i who will be deployed to a less lucrative position.

To be dropped are CSs Simon Chelugui (Labour), Farida Karoney (Lands) and Charles Keter (Energy) but they will get ambassadorial postings.

Sources say the Lands Chief Administrative Secretary Gideon Mung’aro who hails from Kilifi County is being fronted by Raila to take the Lands docket.

Last week, Mung’aro was among leaders who met Raila at his Capitol Hills offices.

For the longest time, Mung’aro, formerly ODM legislator for Kilifi North, was Jubilee party’s point-man from the Coast region, which predominantly supports Raila.

His fallout with Raila was precipitated by the fact that he supported Amason Kingi’s re-election as governor for Kilifi.

There are reports that career civil servant Esther Koimet, the daughter of former powerful minister Nicholas Biwott, might also land in the Cabinet.

For Sirma, he is eyeing the Baringo senatorial seat once Gideon goes for a top seat in 2022.

Insiders added that several meetings have been held in homes of prominent individuals in Nairobi’s Karen suburb to plan the changes.

Some of the leaders reported to have been in the meetings are Raila, Gideon, Central Organisation of Trade Unions (Cotu) Secretary-General Francis Atwoli, former Cabinet minister Paul Otuoma and Siaya Senator James Orengo.

There are reports Otuoma is likely to land a cabinet slot courtesy of Raila.

Further, Rachel Omamo will be shuffled from the Foreign Affairs docket to her former post, Defence.

Kalonzo is likely to bag the Foreign Affairs docket which under President Daniel arap Moi he served for long.

Insiders add that Munya might land the Interior docket as one way of soothing the Meru community that is bitter with Uhuru for orchestrating the removal of Tharaka Nithi Senator Kithure Kindiki as Deputy Senate Speaker.