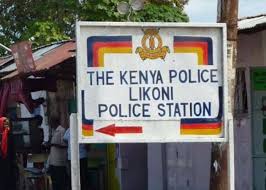 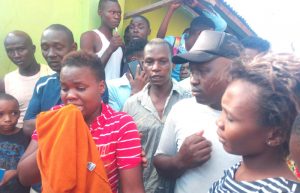 Relatives and friends in a sombre mood around the scene where Peninah Kaimet was shot by the Likoni Deputy OCS Joab Omondi.

A middle-aged woman who was allegedly shot in a love triangle by a Mombasa deputy OCS has been buried at her parents’ home in Anjaru village of Igembe Central subcounty in Meru.
Peninah wa Karendi was shot several times by a policeman, who reportedly committed suicide.
The policeman and Peninah allegedly lived as husband and wife before a crack surfaced in their relationship when the officer started accusing her of being unfaithful to him after allegedly consuming the bank loan that he had taken for her.
Peninah was survived by her two boys aged between six and 11 that she bore in her first relationship.