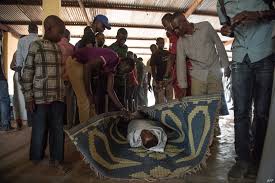 A man in Migori who beat up his girlfriend over suspicions of cheating on him paid dearly for his actions after he was in turn beaten to death by a rival suitor in a suspected love triangle row. Three houses belonging to the alleged killer were torched by angry villagers who were baying for his blood in the shocking Monday incident that happened at Kakrao village in Suna East constituency. Felix Ayodo is said to have assaulted his girlfriend after accusing her of having an affair with their neighbour while he was in jail for peddling bhang. Ayodo was fighting his girlfriend who raised an alarm prompting a Nyumba Kumi elder only identified as Alfred to come in to separate them. The elder took the woman to a local dispensary after she suffered some injuries. He said when the Nyumba Kumi elder came back, he together with the woman’s alternate lover-cum-neighbour teamed up and beat Ayodo to death in retaliation. Irate villagers who called Suna Lower assistant chief Wilfred Onyango expecting the elder to be arrested were irked when police only took Ayodo’s body but arrested no suspect. Angry villagers engaged police officers in running battles as they pelted them with stones while baying for the blood of the woman, the boyfriend and the Nyumba Kumi elder.