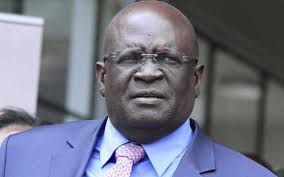 Non-Siaya Luos have nothing to smile about handshake

Murmurs have been cutting across Luo Nyanza with residents unhappy with a lineup that will see Siaya county bag plum positions in government.
The recent appointment of George Magoha as cabinet secretary for Education is believed to have been Raila Odinga’s work attributable to the trappings of the handshake.
Magoha’s appointment elicited age-old grievances about equitable sharing of the cake among the entire Luo fraternity.
Those opposed to Uhuru Kenyatta’s nomination of Magoha to the privileged docket say Siaya county is already teeming with high profile postings in government at the expense of other corners of Luoland.
It is argued the good professor’s nomination comes at a time when Colleta Suda who hails from Siaya, is the principal secretary in the same ministry, with a Dr Okwanyo, also from Siaya, manning a top position at Jogoo House.
On the political front leaders from Siaya are calling the shots in the government formation while their counterparts from other sides of Nyanza province are viewed as mere spectators.
What is being experienced among the Luos engaged in hushed tones laden with envy over a series of favours coming Siaya’s way only evoke memories of many failed attempts to rally other Luos in Nyanza as independent thinkers as opposed to being unthinking followers who have relinquished their brains to the Odinga family.
Such attempts only produced bitter ending as many of the orchestrators were forced into premature political demise while those who came packaged as professionals were later met with fierce resistance on the ground.
Proponents of this school of thought were instantly be branded moles and sympathisers of Raila’s enemies who were hellbent on taking control of the region through divide-and-rule schemes. But sections of Luos who are yet to come out openly are back at it again, questioning the rationale of solidarity and unity of Luos behind the much publicised handshake.
Many Luos see nothing to smile about out of the handshake, with all available goodies having gone the Siaya way.
Dissident voices have pointed out how non-Siaya Luos have walked through a rough path under the Odinga dynasty which has ensured they do not access government carrot with such ease.
As a matter of fact, Raila has repeatedly come under sharp criticism for discriminating against Luos who are not from Siaya in the allocation of top government jobs.