Drama ensued at Whisper’s Park in Nyeri town when highly charged residents directly rejected Covid19 protective material donated by Senator Ephraim Maina. The politician made his way to Nyeri town airborne in his chopper and landed at the nearby Nyeri Golf Club before proceeding to the meeting venue with his aides aboard a convoy of heavy-duty sleek vehicles. Trouble began when Maina in his speech said that he has only come to donate Covid-19 protective materials which included face masks, cartons of bar soap and hand sanitizers. “Your donations are belated! What is disturbing us now is hunger and general lack of money, therefore we do not need your materials,” shouted secretary of Nyeri Ngumbacho Women Group Joyce Kimondo. Before the gathering could turn chaotic, the unruly residents told the visibly shaken senator that it was an insult for him to arrive in Nyeri by air only to address hunger-stricken and poor residents. 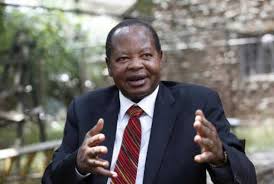 Senator Maina was booed wildly when in his speech began, accusing Governor Mutahi Kahiga over ongoing major projects in recarpeting streets and construction of cabro material car parks in Nyeri town. “The project was planned two years ago, and it is going in tandem with other devolved unit’s development projects,” shouted PCEA church elder Gibson Munyori. At this juncture, the meeting was at the height of degenerating into a battlefield, and the senator was whisked away by security men and his aides and driven away in high speed for safety at the exclusive Nyeri Golf Club. Consequently, some of the donated materials were later picked by street urchins after the unruly crowd was dispersed by anti-riot policeman in full combat gear.