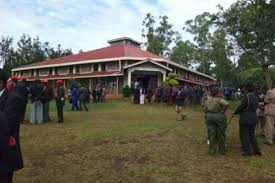 Leadership wrangles continue to persist at Pentecostal Assembly of God whose headquarters are at Nyang’ori in Vihiga county.
It has emerged that one faction had hired goons from Kisumu at an estimated Sh100,000 to provide security.
Vihiga country commissioner Susan Waweru was forced to suspend the PAG meeting that was to be held at Nyang’ori headquarters for two days for fear that the two splinter groups may clash.
Waweru while addressing the meeting that brought together the splinter groups said she feared the two groups may clash posing security threat.
Waweru pointed out the ugly incidents that had happened at the church headquarters where the two groups clashed forcing security officers to intervene to rescue the situation.
The county security boss said she will only allow activities at the church after the court has ruled on the cases that are pending before it.
The church had planned a two-day prayer meeting at Nyang’ori headquarters.
“I will not allow any meeting to be held at Nyang’ori church before the court rules on the cases before it. I have suspended the meeting that was planned to be held at the church because of the security scare among the splinter groups,” said Waweru.
However, PAG head Bishop Patrick Lihanda insisted the prayer meeting will go on because they were not served with any court order to call the meeting.
He said the county commissioner called him in his office to force him call off the prayer meeting.
He said he told her the meeting would go on because he had not been served with any court order to call off the prayer session.
However, the commissioner vowed that those who will hold the meeting will end up in police custody