Plot to have NIC chief replace Njiraini at KRA 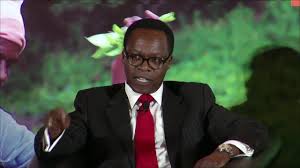 There is confusion at the Kenya Revenue Authority over the next head as the tenure of Commissioner General John Njiraini comes to an end next month.
Word has it that with the merging of NIC and Commercial Bank of Africa associated with the Kenyatta family, John Gachora, the group’s managing director of NIC is being considered to replace Njiraini.
NIC chairman James Ndegwa who is close to the Kenyattas is pushing for Gachora’s appointment as a soft landing ground.
CBA CEO is Jeremy Ngunze. Talk within government circles is that going with the current infighting within KRA, appointing an insider is bound to be counterproductive.
Initially, plans were to have Kenya Commercial Bank CEO Joshua Oigara land the plum slot but that was shelved.
Mid last year, Uhuru Kenyatta appointed former head of civil service Francis Muthaura as the chairman of KRA to serve until October 20 2019.
The head of state revoked the appointment of former Planning permanent secretary Edward Sambili who had been serving in the position since 2016.
He also appointed Mukesh Shah, Leornard Ithau and Susan Mudhune to the KRA board.
Uhuru also revoked Abdi Duale’s appointment and replaced him with Charles Omanga who will serve until June 2020.
Prior to revoking the Sambili-led board appointments, there had been a proxy war between Uhuru and his deputy William Ruto over the appointment of Njiraini’s successor.
The deputy president had tasked his sidekick, house majority leader, Aden Duale, to move a motion to have parliament get the power to vet, approve or reject the next KRA Commissioner-General. Duale is Abdi’s brother.
Currently, the chief taxman is appointed by the cabinet secretary upon the recommendation of the KRA Board.
“There shall be a Commissioner-General of the authority who shall be recruited by the board through a competitive process and appointed by the minister with the prior approval of the national assembly,” the Bill, that sought to amend section 11 of the KRA Act stated.
At the time, there were claims Aden Duale was facing a Sh1.7 billion tax evasion demand from KRA which he was interpreting as warning bells from the handshake dealers to those standing with Ruto.
Uhuru, then Finance minister, appointed Njiraini as KRA Commissioner-General in March 2012.
In May last year, the Sambili-led board had begun the search for Njiraini’s replacement following a directive from head of public service Joseph Kinyua.
Insiders say the competition to replace Njiraini within KRA is between the commissioner for intelligence and strategic operations James Mburu and the commissioner in charge of investigation and enforcement David Yego.
The previous board was said to favour Yego while some power brokers and influence peddlers prefer Mburu.
In 2011, the Marsden Madoka-led board came under pressure from cartels which saw it make changes on the shortlisted candidates for the three top jobs at the institution amid discontent from insiders over alleged foul play.
The board omitted Janet Kabiru from the list of those who had applied for the commissioner general post, bringing the names to 15 of those who had applied.
But it included Simon Nkeri to make eight the number of candidates who faced an interviewing panel.
Sources within KRA were quoted saying some applicants were left out in the final list of those who had applied, effectively locking them out of the race.
Those who were shortlisted included then Barclays Bank boss Adan Mohammed and four sitting commissioners, Njiraini, Wambui Namu, Helen Bila and Alice Owuor.