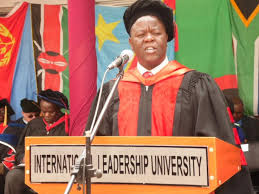 Members of staff at International Leadership University that formerly went by the name Nairobi International School of Theology have petitioned the chancellor Farai Katsande to rein in corrupt managers tarnishing the image of the once prestigious institution.
The staff in a confidential letter availed to us took issue with the senate and management chairman who doubles as the vice chancellor Benjamin Musyoka for running down the once prestigious institution.
To show all is not well, Samuel Muidi and Eric Aseka left the institution unceremoniously but blame one Jeremire Araka for witch hunt and power hungry. Aseka was spotted at Africa International University. His move to the institution was brokered by Dankit Nassiumas, the vice-chancellor of AIU. Aseka worked at Kenyatta University under the tutelage of the late vice chancellor George Eshiwani.
They have challenged Musyoka to explain the criteria he used to promote Catherine Ngambi to be in charge of finance and administration, procurement, human resource, facilities management and students records management.
It has been whispered that although Musyoka is married man, he has always had an affair with Ngambi. Musyoka’s wife is a one Judith who stays in Kitui. The staff said though the institution is meant to churn out honest and faithful Christian leaders, the conduct of Musyoka is unbecoming due to his close relationship with Ngambi. Judith rarely goes to Nairobi.
They said the institution is no longer serving its purpose of educating and training men and women in order to equip them to provide leadership to the church and society based on biblical teachings and priorities, and to spearhead spiritual, social and cultural transformation in Africa and the world.
The staff accused the vice chancellor of colluding with Ngambi to oust governing council members who do not toe the line and installing their puppets to their positions.
They accused Musyoka of failing to follow protocol in hiring Araka who was previously at St Augustine University of Tanzania and does not adhere to Statement of Faith of Campus Crusade. Araka was at one time said to have been the brains behind the infamous Kanu briefs when he worked for the defunct Kanu-owned newspaper, Kenya Times, to stifle prodemocracy proponents in the 1990s.
In making the appointment, Musyoka bypassed qualified persons like James Ndung’u, Ambilike Mwangomo, Levina Mulandi, David Ngaruiya, Mary Mwangi, Charles Nandain and David Munyere among others.
They termed Araka’s appointment as a big disappointment to staff who have served with no salaries for months while Musyoka gets huge perks from regional office of Campus Crusade in Harare, Zimbabwe under the leadership of Katsande and the head Life Ministry Kenya Arnold Nzova.
According to its website, the university board of trustees comprises Fred Ojiambo (chairman), George Mamboleo, Pierina Mugo, Daniel Musinga, James Wainaina and Musyoka (secretary).
The university governing council comprises of George Kimeu (chairman), Jane Kihiu (vice chairperson), Nzova, Francis Djirackor, Lazarus Migua, Wanjohi Waceke, Linda Adolwa, Charles Maye, Mbesa Malombe, Justin Bundi and Musyoka (secretary).
The senate and management is composed of Musyoka (chairman), Ngaruiya, Marta Bennett, Moses Kintu, Mwangomo, Mulandi, Nandain, David Munyere, Annie Kimiri, Lois Kagwe, Rosemary Gitonga and Ngambi.
The staff cited the ills at the institution as hiring interns who are paid peanuts and assigned to do personal works for Ngambi, who doubles up as the administrator in all areas.
Others ills are her attempting to abolish the subsidised staff meals, using Sh700,000 to do repairs without the authority of the ILU board and hiking her salary.
The ILU is situated near Kilimani Police Station Nairobi.
It was founded in 1980s by the Campus Crusade for Christ International.
Staff are bitter that the management does not remit Sacco deductions, pension and Pay As you Earn. For now, they want Campus Crusade for Christ based in America to act and save the institution from collapse.
Previous