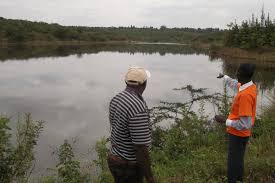 Water pans dug up by the government in Taita-Taveta are now a cause of concern to residents who have for long suffered from water scarcity, after one of the pans burst.
The water pans were seen as a longlasting solution to the flooding menace that has gripped the area for a long time. The project is being undertaken by the ministry of Water under National Irrigation Board.
In Taita-Taveta county, residents are worried over the safety standards put in place. Recently, 13 households in Maungu and Kale villages were said to have been displaced after one of the pans overflowed following a heavy downpour that pounded the region.
Closely following the displacement was the tragic report of a four-year-old boy who drowned in one of the water pans at Marungu area.
The two incidents have triggered alarm among residents who now want assurance from the government that the water pans are safe and will not cause future disasters in the villages. They are also asking the government to ensure the pans are fenced.
Taita-Taveta county was allocated water pans with a total carrying capacity of 128,700 m3. This is equivalent of pans carrying 128.7 million liters of water.
The water pans are to be constructed in Marungu area in Voi subcounty and in Mwatate. Marungu MCA Paul Waweru has supported the project and said it was beneficial to the local residents.