The making of Uhuraila government 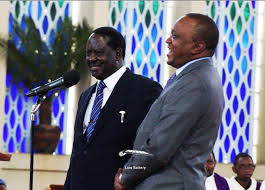 The Handshake; Uhuru and Raila

There have emerged details of a well-crafted political pact between two of Kenya’s leading political families in shaping the destiny of the country after many years of one opposing the other since independence.
The power plan has the full backing of the extended Kenyatta family who argue that they bought William Ruto to a tune of billions of shillings in dollars to back Uhuru’s presidency in 2013. But instead, Ruto, they say, has become arrogant, undermining Uhuru and creating two centres of power within Jubilee.
To rub salt on a wound, they say that Ruto has been the greatest beneficiary of Jubilee government reign in power, accumulating wealth from all corners, fronting for his allies to do multimillion tenders with the government at the expense of Uhuru.
They fear that if Ruto becomes the president, he is likely to embark on revenge mission compared to Raila, whom they now say can forgive going by his past political history and standing in society.
The secret political pact seeks to end the five-decade rivalry between the Kenyatta and Odinga political dynasties that has been characterised by “a love-hate relationship” and marked by hedonistic pursuit for power and supremacy which have most often than not, led to thousands dead.
With the belief that they command substantial votes, the two leaders firmly believe they are assured of a landslide win in the referendum to expand the executive ahead of the 2022 general election.
In the new arrangement, Raila has accepted to go for the less glamorous post of a ceremonial president while Uhuru will assume the powerful post of prime minister, with two deputies in post 2022 government in essence leading Kenya, if his plans are not torpedoed by, some say Raila, for 20 years. Those who say this is naked greed for power say it could boomerang badly for Uhuru as it will be used by some to politically pit his community against the rest in the infamous 41 against one scenario Raila used so well to his advantage in 2007. There has even been talk of a situation whereby it could be 40 against two should Raila’s bromance with Uhuru last a record three years.
A ceremonial president’s role includes the mundane duties such as the opening of new sessions of parliament, in holding honour investitures, receiving the credentials of ambassadors and participating in other civil ceremonies while the executive PM will be the head of the cabinet and the leader of the ministers in the executive branch of government, often in a parliamentary or semi-presidential system.
In many systems, the prime minister selects and may dismiss other members of the cabinet, and allocates posts to members within the government.
In the arrangement, the PM will also propose a deputy president to deputise Raila, and has his eyes on Baringo senator Gideon Moi.
The selection of Gideon is meant to appease the Kalenjin community, whose other son, Ruto, will be the biggest loser in the new political structure should things work according to plan.
For Raila, he will appoint the two deputy premiers. The ODM leader’s pick may likely be Mombasa governor Ali Hassan Joho and his Kakamega counterpart Wycliffe Oparanya.
Besides the fact that the two governors are serving their last terms, Raila also wants the Orange party to be the biggest beneficiary of the power pact as he believes its partners in the Nasa coalition only hang on its coattails. It is on these grounds that Nasa co-principals Musalia Mudavadi, Kalonzo Musyoka of Wiper and Senator Moses Wetang’ula may find themselves locked out in the new Holy Alliance Uhuru and Raila strategists are working on.