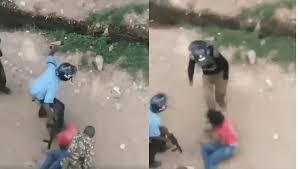 Traumatizing Videos taken during the JKUAT rampage have surfaced online with Netizens calling upon the IG and CS Matiangi for immediate action against the police officers who brutally beat up unarmed JKUAT students.

The students have been able to identify one police officer whom they say is always patrolling in that area.

The chilling videos shows almost five police officers with kicking and stepping on the head of a helpless JKUAT girl as she screams begging for mercy.

Here are the chilling videos

#Jkuat Doing this to a person you should protect is reckless and unacceptable, what exactly is the work of police officer? @IPOA_KE is even worst with lots of filed cases with no convictions made. #StopPoliceBrutality #Jkuatlivesmatter #juja
pic.twitter.com/9F7HeFJ7tK

A video i took yesterday of a guy getting something from the shops not armed and with no intentions of doing any harm but the police just decided to beat him up🤦🏽‍♀️💔police brutality has been alarming and somehow they are the people who are suppose to protect us #jkuatlivesmatter pic.twitter.com/3J3dok7tn2

The Interior CS, Fred Matiangi has criticised the actions by the said officers and promised to jointly engage the IG and ensure stern disciplinary actions are taken upon identifying the officers in the viral videos.

On the spot also were Juja residents who also beat and used machetes to cause more havoc on the helpless JKUAT students who had nowhere to run to.

Here are more videos of the civilians who meted more pain to the students.

Look at this now😭Some #juja residents went ahead and did this to a #jkuat student. Walimrusha kwa maji ya sewage! Juja community hamna huruma kidogo? Are you in your right minds? Dunderheads! These hooligans’ faces should be noted na ashikwe. Ifikie Matiangi. #jkuatlivesmatter pic.twitter.com/Roc6Mwxjzc