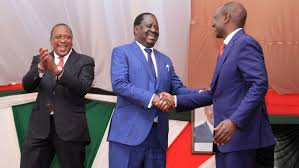 More trouble looms ahead for the Deputy President William Ruto as his co-partner in the government they formed President Uhuru once again revealed that he is less concerned about his  2022 successor.

Its vivid in people’s mind how the president had promised to support Ruto’s presidential ambitions come 2022.

Once again Ruto was treated to a another humiliation show when the president decided to speak in on Wednesday in Mang’u Gatundu south in the presence of his DP who wouldn’t understand and could only afford some laughter.

Uhuru only laments in Kikuyu in light of the fact that he fears Ruto. Why not tell him directly in a language he can understand ?#ConfusedPresident pic.twitter.com/8NDjPor5cU

While speaking, the president said he didn’t care who becomes president in 2022.

He said,“Kenyans want a leader who will not disrupt businesses or their day to day lives.”

“It doesn’t matter if it will be Njuguna, Waweru, Haji, Onyango or any other name who will be voted in,” stated Uhuru.

He told the political class to shelve unending politicking and engage in what they were elected to do, urging them to properly utilize public funds for the benefit of Kenyans.

The event was snubbed by area politicians allied to Ruto, among them Gatundu South MP, Moses Kuria, one of the fiercest critics of the proposed referendum to implement the Building Bridges Initiative (BBI) report.

Its worth noting the comments by Lawyer Ahmednasirr about how Uhuru made sure both Raila and Ruto are contended with the BBI report.

Names of Nairobi county top officials to be arrested with Sonko