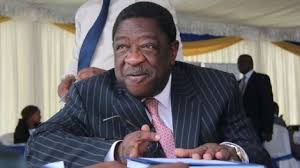 The wife of former Attorney General and Busia Senator Amos Wako who has been barred from travelling to the United States has been fighting mental illness for a long time.

It came as a double tragedy to the family when the US banned Flora Ngaira, Wako and their lawyer son Julius from entering the country for what the US Department of State describes as involvement in significant corruption.

The unexpected move has caused panic among top leaders in the country linked to corruption.

The action was aimed at sending a strong signal that the United States is a valuable partner in Kenya and ready to curb and punish corruption perpetrators in the nation.

Julius, a splitting image of his father, is a lawyer specializing in banking and finance

Julius, a splitting image of his father, is a lawyer specializing in banking and finance.

He attended his father’s alma mater, Alliance High School and after attending the University of Warwick and Queen Mary University for his Masters in Law, he joined his father’s old law firm on his way to his current position as a partner in the corporate and commercial division of one of the most prominent legal practices in Kenya.

His mother and Wako’s wife Flora, is a scion of a prominent Luhya family in Kakamega.

Her father, Benjamin Ngaira was a wealthy and respected civil servant, the first African Deputy Chair of the Public Service Commission in 1962 when he was appointed by Kenya’s last colonial governor, Malcolm MacDonald.

Ngaira’s children became part of Kenya’s Who’s Who. Besides Flora, who wrote a children’s book ‘Kenyan Fables’ published in 1989, there is also pioneer research scientist Beneah Majisu, the first Director of Muguga Forestry Institute and who was married to Lady Justice Effie Owuor before their divorce.

Then there is Prof Norah Olembo and the late Jemimah Kaisha, a long-time secretary in State House.

Ngaira died at Kenyatta National Hospital on February 27, 1968 after doctors forgot to remove some gadgets, including cotton, before stitching him up, forcing a second operation that claimed his life.

Plot to have Sidai replace Manduku as KPA boss